Turmeric is one of those precious spices that the western cuisine has always underused. This brightly hued spice is the heart and soul of the Indian cuisine as well as the authentic home remedies for skin and health care. It is, indeed, the East that knows how to best use turmeric powder to get maximum benefits for health and beauty.

Turmeric is the reason behind the bright color of the luscious Indian curries and the flavorful Mughlai dishes, and for good reasons. Not only does it make the food appealing to the eye and the tongue, but also offers immense health benefits when added to food. To top it off, turmeric powder is as good when applied topically as it is when ingested.

Of course these secrets of turmeric aren’t easily discovered by the common person. I’ve had friends who’ve had turmeric root gifted to them, and they just kind of tilt their head in confusion and end up cramming it in the back of the freezer. But don’t neglect this golden spice!  With a history worth a thousand-page novel, this kitchen treasure simply needs to be unlocked with the ancient wisdom of Ayurvedic medicine.

So with that said, we here in Coconut Country would like to share these family secrets with you so you too can enjoy the 7 fantastic benefits of turmeric powder to strengthen your health and beautify your body so you can achieve your own mission in life.

Turmeric contains curcumin, a bioactive compound that is not only responsible for its bright yellow color but also for its medicinal properties, the most prominent of which are anti-inflammatory, antiseptic, antibacterial, antioxidant and analgesic.

Inflammation is one big cause of so many maladies so that just by lessening it a bit you can achieve major strides in your health. It is actually the reason behind painful diseases like asthma, bronchitis, psoriasis and arthritis.

So, how can you use turmeric powder for inflammation and arthritis?

The good thing about turmeric powder is that it works both ways, through ingestion as well as through topical application. Here are a couple of ways which will help you bring down inflammation, especially in arthritis:

Turmeric is one spice that is replete with antioxidants. Antioxidants are those compounds in nature that combat the free radicals in the body and help us stay healthy and robust. The science that lies behind it is that antioxidants fortify your immunity, thus letting you fight diseases, even as deadly as cancer.

So, how is powder from turmeric good for you as an antioxidant?

Turmeric, of late, has been noted for its ability to fight off cancer and malignant tumors. Cancer cells are like any other cells in the body that contain DNA. It takes almost 6 years for a cancer cell to be a detectable size. This is the reason why cancer can go undetected for years till it is already in its advanced stages.

Studies reveal that turmeric, to our good fortune, has the ability to impede and even halt the growth of cancer cells. Its main compound, curcumin, can alter the instructions of the DNA to cancer cells, thus causing cancer cells to die. Research also reveals that regulated intake of curcumin can prevent cancers of lung, stomach, colon, liver, and breast primarily based on its antioxidant and anti-inflammatory qualities which interfere with the cellular signals received by the cancer cells.

So add turmeric powder to your food as a staple while cooking, or take take turmeric water (as explained above) regularly.

3.  Protects the Heart in Various Ways

One of the best uses of turmeric powder is for heart disease. The fact that it is contains curcumin has a lot to do with the health of the heart. Curcumin, as we have discussed already, possesses antiseptic, anti-inflammatory, antioxidant and analgesic properties. Curcuminoids can actually do a lot for your heart:

Wisdom says to avert and fight cardiovascular issues by ingesting turmeric in the form of a spice, supplement (curcumin), tablets or teas (concoctions). Just make sure that you consult your trusted doctor for the best dose.

Brain health or improvement of cognitive abilities is fast becoming the most well known advantage of turmeric. You will be astounded to know that according to research, Indians of ages 70-79 run a 4400% lower risk of developing Alzheimer’s than corresponding Americans simply because turmeric is a staple spice in Indian diets.

Curcumin, since it is responsible for preventing the buildup of amyloid plaques (those associated with Alzheimer’s) in brain arteries as well, is said to improve brain function to keep the dreaded disease away. The supporting research, conducted on mice and the results were remarkable with beta-amyloid in AD (Alzheimer’s dementia) mice that were given low doses of curcumin were decreased by around 40% in comparison to those that were not treated with curcumin. In addition, low doses of curcumin also caused a 43% decrease in the so-called “plaque burden” that these beta-amyloids have on the brains of AD mice. Surprisingly low doses of curcumin given over a longer period were actually more effective than high doses in combating the neurodegenerative process of AD.

Just add a bit of turmeric to your food while cooking it. It gives a great flavor to curries and even scrambled eggs. You could also try it in lentil dishes and casseroles.

Diabetes is a very sad disease.  When we see a loved one begin to go for dialysis and slowly fade away into total system failure, we really wonder what we could have done to prevent such a tragedy.

But holistic doctors tell us regular intake of turmeric can actually regulate glucose and insulin levels. This is because curcumin has the power to keep the pancreas in a good shape. Since the pancreas is responsible for regulating the production of insulin in the body, a healthy pancreas mean regulating the right amount of insulin and thus correct glucose levels. Turmeric thus has been known to help prevent insulin resistance in the body.  It has been studied to work on triglycerides and blood sugars to lower them if they be high, thus impeding the diabetic attacks or altogether preventing type-1 diabetes.

Of course, the effect will depend on how you use turmeric powder. Apart from having it as a regular spice in your diet, you can make a choice from capsules, tinctures, tablets and tinctures, all which can vary in quality.

Asian, especially Indian, women have been using turmeric for centuries as a secret to their glowing skin. Applying turmeric powder topically, mostly in the form of face masks and facials, can actually give you glowing Hollywood skin without the Hollywood price tag. Treating acne, fighting signs of aging, correcting pigmentation, lightening stretch marks, soothing burns, healing wounds, removing facial hair, treating cracked heels, exfoliation, reducing oil secretion by sebaceous glands – you name it, turmeric has become the leader for all this and more.

It’s no surprise its antiseptic action is now seen to treat infections of the skin, with its antibacterial action known for healing it, and its anti-inflammatory properties taking care of problems like acne and pimples. But even without such gruesome problems, so many rely on its antioxidant elements to impart an unrivalled glow to skin. It’s like the magic dust that when sprinkled produces great skin.

Topical application of turmeric powder can also add more charm to your crowning glory. First, a simple pre-shower application of olive oil with a pinch of turmeric powder can free you of fussy dandruff. If you suffer from dermal infections in the scalp, try turmeric for conditions like eczema, flaky and itchy scalp, and dermatitis. It can also fight other bacterial and fungal infections of the scalp. This is why doctors say it impedes hair loss, and even fosters hair regrowth.

Finally, if you boil it in water with other yellow colored herbs like saffron, calendula, or chamomile, you can rinse your hair with it post shampoo to get glowing, silky, luminous hair.

So will any sort of turmeric work for these uses?

The truth is that turmeric’s qualities do vary significantly, and some turmeric is less pure than others.

The good news is that Coconut Country Living’s turmeric, currently on special, has actually had its organic turmeric tested by the FDA for purity, and is the ONLY turmeric our family uses for food, beauty, and pain, and the same one our customer’s rave for. 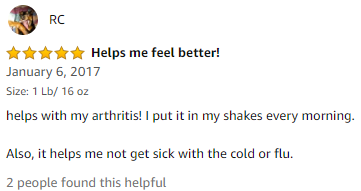 Now that it is replenished, this special turmeric is selling at 30% off during this special relaunch period so all our customers who have been pleading for it can stock back up.

As a special bonus, customers will also receive our Kindle Best Seller: Turmeric’s Secret Benefits of Health & Beauty with any size purchase.

This action packed e-book is filled with turmeric hacks even the yogis aren’t willing to tell, but we divulge these secrets to our customers so they can use this kitchen gold wisely for all sorts of beauty, health, and household uses.

So if you know anyone who values not getting sick while looking great, getting some incredibly versatile turmeric powder is a great way to invest in your health and learn the ancient secrets to the abundant life:  One that is not confined to shuffling your feet or wearing some medical device that embarrasses you in public.

Don’t forget: it’s not just used for tasty turmeric tea,  but savory and sweet dishes too, from curries, to baked goods, to CHOCOLATE, all with what’s been called world’s most amazing, healing spice!

Start your journey today by going to check Out CCL’s Organic Turmeric  with TurmerTrueTM testing and we will look for you in Coconut Country!

How Curry Kicks Cancer in the Can: Research on Curcumin Turmeric and Tasty Treats for Cancer Prevention
Tremendous Turmeric Ginger Muffins!
Unlock the Secret to Perfect Health with Turmeric
Copyright © Coconut Country Living 2022. All Rights Reserved. Design By Proper Source Inc.
Back To Top